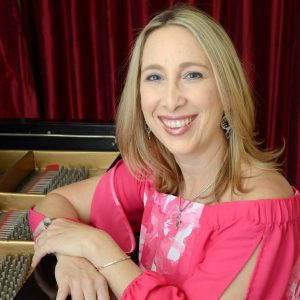 Alyse Korn is a professional Jazz pianist, composer, vocalist and specializes in music education through the Suzuki method. She is a Doctoral Candidate in the USC Thorton School of Music, Jazz Studies Department, with areas of concentration in music education, music technology and film scoring.

Born into a musical family in Miami, Florida, she began playing professionally at the age of 14 and has since worked with a diverse mix of artists. She earned a BM in Studio Music & Jazz Piano Performance from the University of Miami Frost School of Music, and an MFA in Jazz Piano Performance from California Institute of the Arts (CalArts) Herb Alpert School of Music.

Alyse has completed and registered teacher training in all levels of the Suzuki Piano Method and Suzuki Early Childhood Education for ages zero through three years, and certification in Music Mind Games, a unique and engaging music theory system. Her piano students receive awards and honors in music competitions, including the areas of performance, improvisation, theory and composition. Alyse enjoys traveling nationally and internationally as both a teacher and performer. Visit her performance page at ReverbNation.

One of our students

Suzuki Piano School of Ojai is proud to be a vendor for: